Commentary on the “fintech bubble” started as early as mid-2014. As it continued, fintech has been gaining momentum, and more and more, traditional banks and financial companies are reconsidering the strength of their market position.

Innovation has spread to payments, lending and currency, from companies such as Tyro, SocietyOne and OnDeck. But instead of focusing on this, the question still being asked is: how long could these “unicorn” companies can continue?

The fintech bubble was named after the dotcom bubble of the early 90s, which burst spectacularly in March 2000. In the late 1990s Internet companies had expanded, with online retailers such as Pets.com and Webvan driven forward by low setup costs, an increase in consumers’ computer access and a willingness by stock market investors to fund companies which had no clear business plans.

A key difference with the dotcom success is that it was all on the stock market. When volatility was sensed in early March 2000 on the NASDAQ, by the end of that month multi-million dollar companies started folding.

In contrast, fintech startups are primarily funded by angel investors. If they fold, they fold privately, limiting the knock-on effects.

The similarities between the fintech and dotcom bubbles are glaringly obvious – both driven by tech-based, low-cost companies that are disrupting traditional markets. In dotcom it was retail – although to a somewhat lesser extent – and for fintech it’s the financial and tech markets.

But there are differences to note as well. Looking at the graph below, the investment rate in fintech has been much slower than it was in dotcoms. 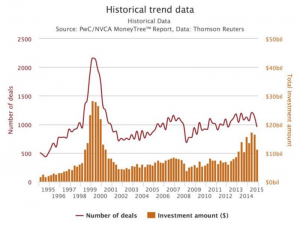 The volatility of the dotcom era has also brought a certain wariness around “unicorn” growth industries today. While “it can happen before, it can happen again” often seems to be the feeling towards the upsurge in fintech investment, just because there is growth, it doesn’t necessarily mean there is a bubble.

An interesting point to note is also the fintech adoption by major banks. The dotcom bubble was short-lived, and the innovation offered by e-retailers had little time to properly “disrupt” their bricks-and-mortar competitors.

Fifteen years later, companies like Uber have caused protests worldwide and have made it necessary for governments to bring in new laws.

In Australia, the “Big Four” banks have all become increasingly involved in fintech, not only investing in their own innovation labs but forming partnerships with startups through referral programs and product investments.

Fintech startups have also been involved with helping banks such as ANZ develop customer registrations programs, and there has been increasing experimentation with bitcoin and blockchain technology.

The prevalence of fintech in more traditional spheres, its adoption by banks and the slower growth of investments by private investments all attest to not the lack of a bubble, but rather the reduced likelihood of it popping.

Governments, including Australia’s, are already bringing in laws to restrict investing in early-stage startups to experienced investors. Startups are not merely welcoming this regulation, but going as far as to drive and help shape it themselves.

Many people, especially investors, who are involved in fintech lived through the dotcom bubble and don’t want it to happen again. While the growth of fintech is not completely unlike that of the dotcom era, fear of a supposed bubble bursting shouldn’t stifle innovation, or reasoned investment in it.

Elizabeth Barry, Senior Writer at finder.com.au, has joined Australian FinTech as a guest writer. She has been writing about personal finance for over two years and has firsthand experience in the space having worked at finder.com.au in its start-up phase.

Elizabeth is fascinated with the level of innovation happening in fintech and the way Australia is responding – at the individual, business and government level. She believes that established companies are ripe for disruption and that the fintech space is ready for acceleration.

Elizabeth will be keeping an eye on the space as it grows and is eager to write about emerging developments on Australian FinTech.