A Bitcoin for your thoughts? 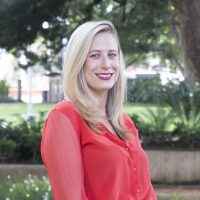 A Bitcoin for your thoughts?

Those of us in the tech world can all agree that Bitcoin is genuinely starting to take off or at least cause a stir…. If by take-off you mean clamber $672 bucks one day and slide down $384 the next. But while some of us look on with wide eyed enthusiasm as the price of it continues to climb and fall and then climb and fall (but mostly climb at the moment!), much of the rest of the world continues to scratch their heads as they grapple to understand “what’s it all about?” And of course, whether it is in fact, actually here to stay.

I’ve been hearing the terms Bitcoin and the Blockchain on and off for years but my ears never truly pricked up until my trip to Silicon Valley last year where our FinTech study tour had the opportunity to hear from one of the local Bitcoin start-ups.

This is where founder and CEO of Wyre – Michael Dunworth gave me the only explanation of Bitcoin and the Blockchain I had ever been able to properly wrap my head around.

“The internet was/is an exciting way of sharing information, and sitting on top of that, you have applications like email, which provide us with a medium to transfer information in near real time. After email came things like facebook messenger, what’s app etc.

Similarly, to this, Bitcoin is an application built on top of the Blockchain. Bitcoin is like email in that you can transfer extremely fast, but instead of transferring information, we’re transferring value.

In other words, the same way the internet allowed people to transfer information in real time, the blockchain allows us to transfer value. Bitcoin was the first application built on top of it, but moving forward we’ll see hundreds of different examples, and we’ll wonder how we ever operated without it.”

The penny dropped. But even then, my initial reaction was still along the lines of “Sound’s really cool but what is this ‘penny’ that I can’t physically hold actually worth, now and in the long term?”  Well the markets have deemed a hell of a lot more than it was back in September 2016 when I was in Silicon Valley and that was only 10 months ago.

There has been a huge amount of hype surrounding Bitcoin. There has been an inordinate amount of criticism of it also.  I think the most succinct critique I can remember it being given was “you are investing in a line of code.” And on this topic in particular, the quantum computing risk has sent a few ripples through the conversation, with assumptions being made that it has the power to rip the blockchain open once it cracks Bitcoin’s security algorithm “SHA-256”.  However, the solution to this may be a lot more logical (and I’ve been told completely possible) than we all assume with suggestions that Bitcoin purely needs to update its security algorithm to one that is quantum proof.

There is of course the volatility in price factor which can’t be ignored. Dunworth says in defence of this that ‘motion creates emotion’ –

“Digital asset (bitcoin) trading is similar to the stock market where noise and signals create emotions to drive financial decisions. Sometimes causing a snowball effect of noise and “hype” which ends up becoming what we all are aware of, a bubble. I see there being a little bit more turbulence to come as the protocol faces its largest challenge it’s seen yet. Scaling. It looks like things are going in the right direction, but the next 4-6 months will really tell. If this is executed well by the core developer team, you’re looking at big institutions getting involved (more than present), and could see bitcoin going on its next run to beyond 5 figures within 18 months.”.

Beyond 5 figures – Wow. But in the short term, things have been a bit rocky – especially pre and post Bitcoin Fork (read more about that here https://www.businessinsider.com.au/bitcoin-price-fork-happens-2017-8) , so I can easily understand why investors, advisers and the like have watched on from the poolside cautiously rather than getting their feet wet up until now.

At the same time though, with the ‘temperature’ really starting to rise, and with the current value of Bitcoin sitting at $4,315.54 AUD (interesting sidenote – as I sat down to write this two weeks ago it was at $3,339.76 AUD) and predicted to reach as high as $5000 USD by the end of 2017, is now is the time for more of us to have the courage to dangle our toes at the water’s edge?

Dunworth says yes, explaining that investing even very conservatively in bitcoin will help people comprehend it, ‘One of the main reasons people are reluctant to invest is because they don’t understand enough about it. The coverage on it is getting broader, however it’s still not reaching far enough into the homes of the average family. I personally, find the best way to educate yourself about a topic is to put something at stake, whether that’s your time, or finances. In this case, I believe people should buy a small portion to give them an incentive to learn. This doesn’t occur however, because we’re not seeing simple and smooth enough user experiences from bitcoin companies selling bitcoins (yet).’

We can all agree that there’s work to be done, but at the same time, there has been a lot progress made as well. And although I don’t have a crystal ball, with the progression Bitcoin and the Blockchain has made even in the past 12 months, I think it’s fair to say it will be sticking around for a while.

It’s not and will never be my job to recommend where people spend or invest – So let me be very clear that I am not suggesting one way or the other – I’m merely exploring the hype – albeit very enthusiastically I’ve been told. But it has been because of a more thorough understanding of this potential asset class, that I’m finally not adverse to the notion of using myself as a guinea pig. I’m using an app called CoinBase and an embarrassingly low level of investment to trial it all out.

Perhaps more importantly however, I’m intensely curious about where the rest of the industry stands on the matter.

Are we fundamentally adverse to the notion of an intangible commodity altogether?

Has our collective conservative approach to Bitcoin and the Blockchain shifted at all in the past 12 months?

Or are we still content with being innocent bi-standers, waiting for complete certainty before we take the plunge into putting our money where our mouth is, or dare I say it, suggesting our clients do the same?

A penny or Bitcoin (though at the current price, I’m not sure I could afford it) for your thoughts….

The 10 Biggest Fintech Companies in America