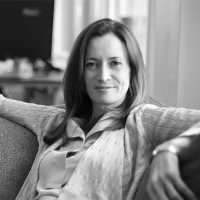 Blockchain could finally drag Wall Street recordkeeping into the 21st century, but before they’ll use it financial firms want to know their data will be kept secret. The startup run by former JPMorgan Chase & Co banker Blythe Masters says it’s found a solution.

The version of blockchain that powers the bitcoin currency is wildly transparent, recording each transfer of bitcoin from one person to another in a public database anyone can tap into. But such openness is anathema in finance, posing a conundrum for Wall Street firms otherwise drawn to digital ledgers because they could simplify and speed up recordkeeping.

Digital Asset Holdings, where Masters is chief executive officer, is deploying what it calls fingerprints to address that problem. Though these fingerprints get shared among all users of a given blockchain, only trusted parties can decipher them.

“Our view is that sensitive, contractual, market-moving, private data should be kept private,” Masters said at a recent client presentation. “Let’s think about what regulators and regulated financial institutions care about. First of all, it’s privacy.”

The approach is similar to what Digital Asset competitor R3 said it was developing earlier this year. Richard Gendal Brown, the former executive architect for industry innovation and business development at IBM, built a blockchain platform for the company called Corda that greatly restricts the information it shares among its users. Last week, R3 released Corda’s source code to the public.

Distributed-ledger technology has captivated Wall Street executives because it could process virtually any kind of trade or money transfer in minutes rather than days. That vastly reduces the amount of capital that must be set aside until transactions are settled. Industries such as health care, supply-chain management and mining are also experimenting with the software to improve efficiency or ensure the provenance of diamonds, for example.

The Digital Asset development – like R3 and Chain releasing their code to the public, or world-renown cryptographers joining blockchain startups – is another indication that the software is gaining traction.

Digital Asset clients include the owner of the Australian Stock Exchange and Depository Trust & Clearing Corp, the back-office entity that clears and settles all US stock and bond trades. Both firms are testing if those systems can be switched to a blockchain to cut settlement and payment times from three days to minutes. Digital Asset hopes to have a version of its system ready for their use by the end of 2017, Masters said.

Peer-to-peer platform Folk2Folk gets authorised by the regulator